Benefit Garden Party and Performance of “Beyond Words”

MEET & GREET  after the show with Bill Bowers

Bill Bowers, world-renowned performer and mime, returns to the Millibo on Friday, July 20th for one-night-only performance of his award winning solo show “Beyond Words”. This is a benefit evening for the Millibo Art Theatre and it kicks off with a Garden Party beneath the Big Tent with drinks and appetizers beginning at 6:00 followed by Bill’s performance at 7:30.  After the performance, desserts will be served at a post-show party with Bill Bowers. The price of all tickets includes drinks, appetizers and desserts.

What is a Boy? In a visual poetical world, Bill Bowers grows from boy to man exploring maleness, and how culture informs gender. One of the most acclaimed multi-disciplinary artists in America today, Bill Bowers employs an eloquent mixture of music, monologues and mime to create a vibrant montage of stories that is Beyond Words.

Bill Bowers employs an eloquent mixture of music, monologues and mime in his ongoing investigation of the silence surrounding the enigmatic matters of gender in our culture today. Often compared to Chaplin and Keaton, he has performed throughout the U.S., Europe and Asia. For Beyond Words, Bowers draws his characters from life and moves beyond mere anecdotes to create a vibrant and visual poetry. With audacity and compassion he explores what it means to be a boy and the messages we receive on our way to becoming men. It is an inclusive montage that celebrates maleness and humanity in capacious terms rather than any narrow punitive viewpoint that diminishes us all. 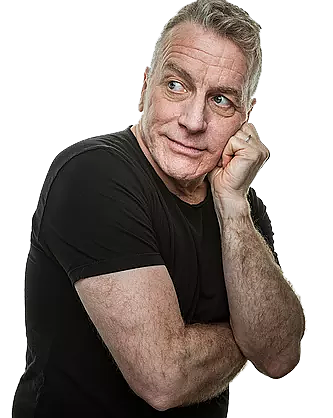 As an actor and a mime, BILL BOWERS has performed throughout the U.S., Canada, and Europe. He appeared on Broadway as Zazu in Disney’s THE LION KING, and as Leggett in THE SCARLET PIMPERNEL. His original shows, IT GOES WITHOUT SAYING, ‘NIGHT SWEETHEART, ‘NIGHT BUTTERCUP and UNDER A MONTANA MOON have been produced Off Broadway and received critical raves. Margo Jefferson of THE NEW YORK TIMES writes:

“To see Bill Bowers is to see the technical elements of a style that bring Marcel Marceau readily to mind. Mime can be wonderful…the air between him and us was his palette.”

Bill has performed on some of the most prestigious stages in America, including Radio City Music Hall, Madison Square Garden, The Kennedy Center, and regional theaters nationwide. His television credits include LAW AND ORDER, ONE LIFE TO LIVE, ALL MY CHILDREN, REMEMBER W.E.N.N., and Disney’s OUT OF THE BOX. He is also featured in the film TWO WEEKS NOTICE with Sandra Bullock and Hugh Grant, and the online news channel THE ONION NETWORK.

Bill holds an MFA from Rutgers University’s Mason Gross School of the Arts, and an Honorary PhD from Rocky Mountain College. He has studied mime with the legendary Marcel Marceau.

Visit Bill on the web at www.bill-bowers.com