Home » On the Road » ELEPHANT 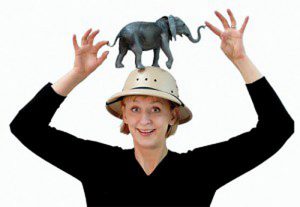 Journey along on a theatrical safari and be amazed as unforgettable characters, remarkable elephants and surprising events come to life through the physical comedy and remarkable storytelling of Birgitta De Pree.  Weaving poignant, true-life accounts of elephants with childhood memories of Africa, Birgitta reveals the power of “story” and how our own stories and of those of the majestic pachyderms might not be so far apart after all.

Birgitta De Pree received her MFA in performance from the National Theater Conservatory and has spent the last two decades working throughout Colorado as a performer, director and educator. Fourteen years after founding the MAT, Birgitta still believes that theatre is one of those magical places where we “wake-up and remember why we’re here”. Birgitta enjoys performing both at the MAT and throughout the community.