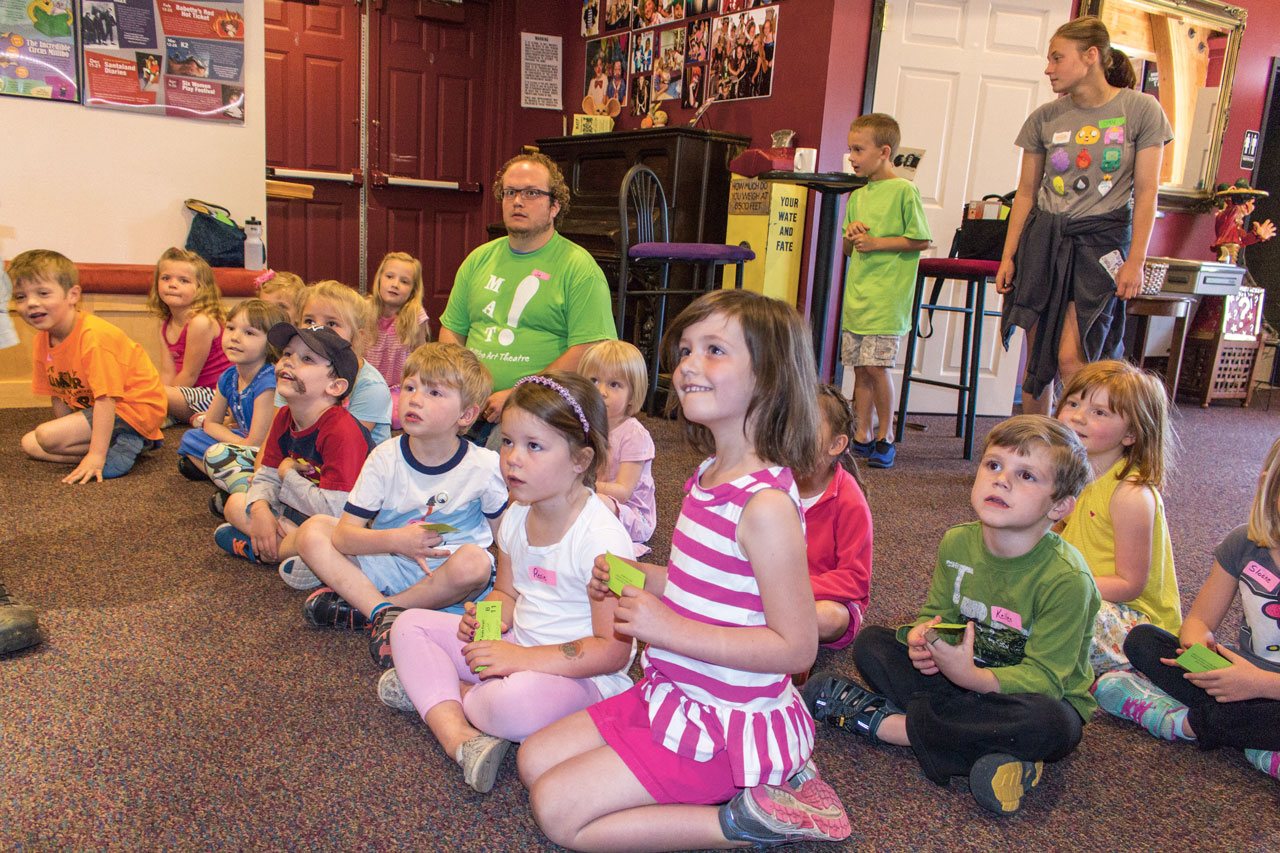 Youngsters learn how to buy a ticket for the theater.

It is the first day of the summer camps for children at the Millibo Art Theatre, and Executive Clown and Director Jim Jackson asks the instructor, “How’s it going?”

In their course titled Messy Fun Camp, children aged 7 to 9 file outside behind the instructor, with their own smiles to match Jackson’s, because they’re on a mission: To make a mess.

For Jackson, 59, and his wife, Artistic Director Birgitta De Pree, it appears as if their mission is to create smiles and produce good times at the Millibo Art Theatre, MAT for short.

“It’s so much fun working for a professional clown,” said Alyssa Smith, who works the box office and public relations for the MAT. “They are the best people I’ve ever had the pleasure to meet and work for.”

Jackson and De Pree just ended their second season at the MAT’s location at 1626 S. Tejon St., across the street from Ivywild School. It is an intimate setting with 109 seats, and all are close to the stage. This is the theater’s third location.

A Cañon City native, Jackson grew up enjoying the comedy of Red Skelton and other TV clowns. In high school, he started theater arts as a hobby. Jackson majored in psychology in college while taking the same mime class all eight semesters, honing his craft of communicating with humor without making a sound.

Also during college, he made his first nickel in theater after partnering with two others to form a classic mime troupe.

After graduating, Jackson traveled to Europe and discovered the circus, which was different from traditional American circus. There, the single-ring circus offered “beautiful and real artistry.”

Later, he joined the Royal Lichtenstein Quarter-Ring Sidewalk Circus, headquartered in San Francisco. With the circus for 18 months, Jackson toured the United States being a clown, honing his humor talents.

“It was a great introduction to street performing,” he said. “That later became a huge influence on the theater and the comedy clown work we do.” He then obtained an agent and toured the U.S. and internationally as a clown, performing at New York’s Lincoln Center, Washington, D.C.’s Kennedy Center, London’s Royal Festival Hall, the Edinburgh Fringe and others.

While touring, Jackson met De Pree in Denver when she was earning her master of fine arts degree at the National Theater Conservancy. They both had performed successfully in domestic and international venues, and while touring, they noted the varied theater business models. 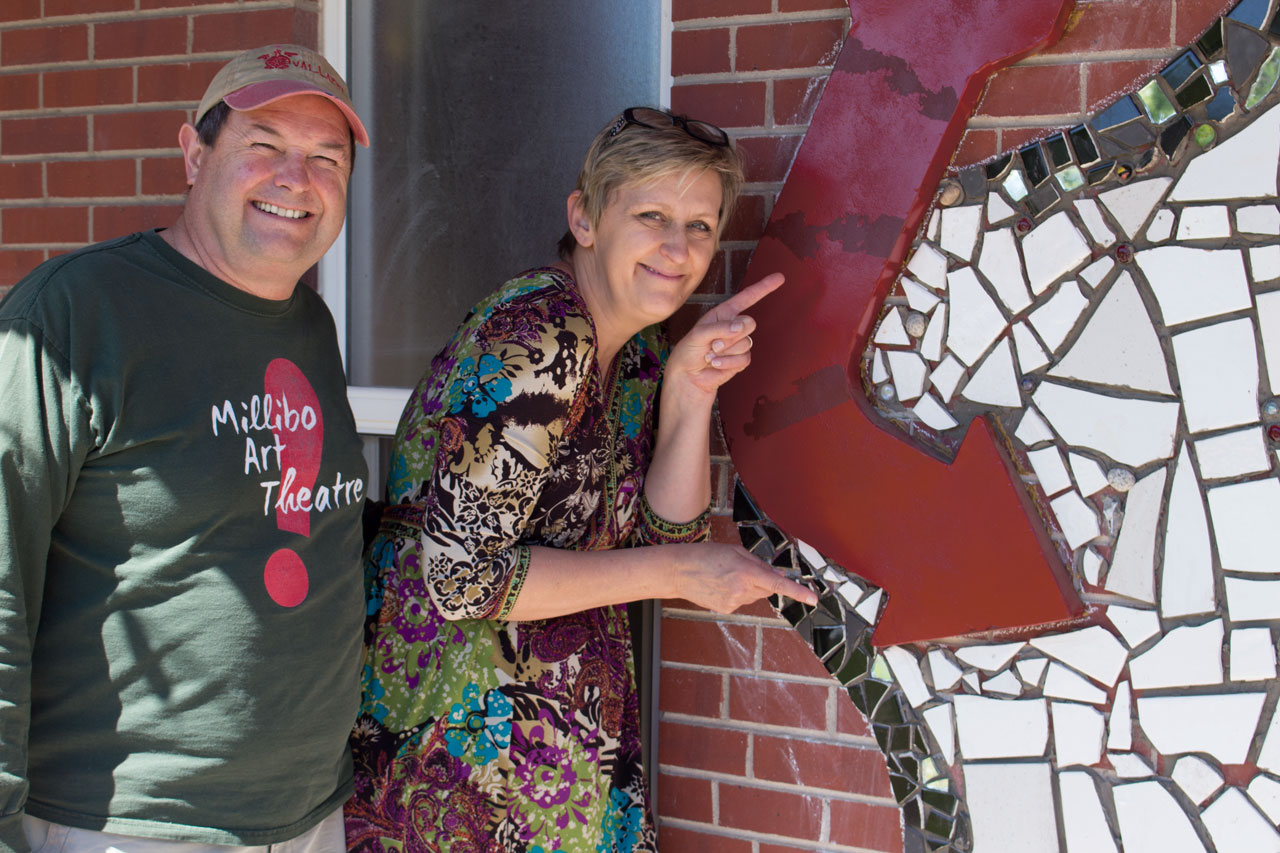 In 2011, Jackson and De Pree renamed their endeavor the Millibo Art Theatre after two people who had worked there, Millie Harrison, 19, and Bo Frese, 37. Both died within four months of each other. On Dec. 10, 2010, Frese died after performing a gymnastics stunt during which he broke his neck. On April 2, 2011, Harrison died of a viral infection while she was attending college in Minnesota.

Renaming the theater “has been a great way to honor them,” Jackson said.

Two years ago, MAT moved to its current location in the Ivywild neighborhood, the former Ivywild Community Church.

“It was the most churchy space you can imagine, from the smells … of little old ladies cleaning the pews …” Jackson said. A cadre of theater volunteers and others transformed the space to a theater with stage and raised seating.

As a nonprofit theater, the status “is a huge help for us. It allows for us to fundraise in a much easier way,” Jackson said.

When he toured as a for-profit clown, Jackson met with friends in the nonprofit sector, whose work “totally depended on grants and donations,” he said.

Now, he understands that world.

“Even though we have good audience support, we still depend on grants, corporate sponsors and donations,” Jackson said. “That’s the way the arts world works. It’s the reality of it.”

The MAT is one of three theaters in town that pays its performers, so it can afford to be picky when choosing the art it produces. If approached by a group wanting to perform there, and the MAT chooses to accept the piece, the theater co-produces it.

Jackson said his favorite act is the one he started with — performing as a clown.

“I’m still primarily a clown. That’s still my first love,” said Jackson, who stopped touring when he and De Pree formed the MAT in 2001. “I was surprised by how much I loved the producing angle.”

As a theater, “I think we have found our niche,” Jackson said. “We are dedicated to producing new work and we have a real dedication to children.”

One of De Pree’s favorite performances is Gods, Guns and Pancakes, a solo piece written and performed by Jackson.

“It explored fate, chance and how he became a clown,” she said. “It is a reflection of how we all end up where we are.”

“It was fun for me,” Jackson said, “because I was playing the storyteller, myself and a clown.”