“The MAT consistently creates an audience experience that is not only inclusive but deeply freeing – and so often surprising.”
– The Gazette 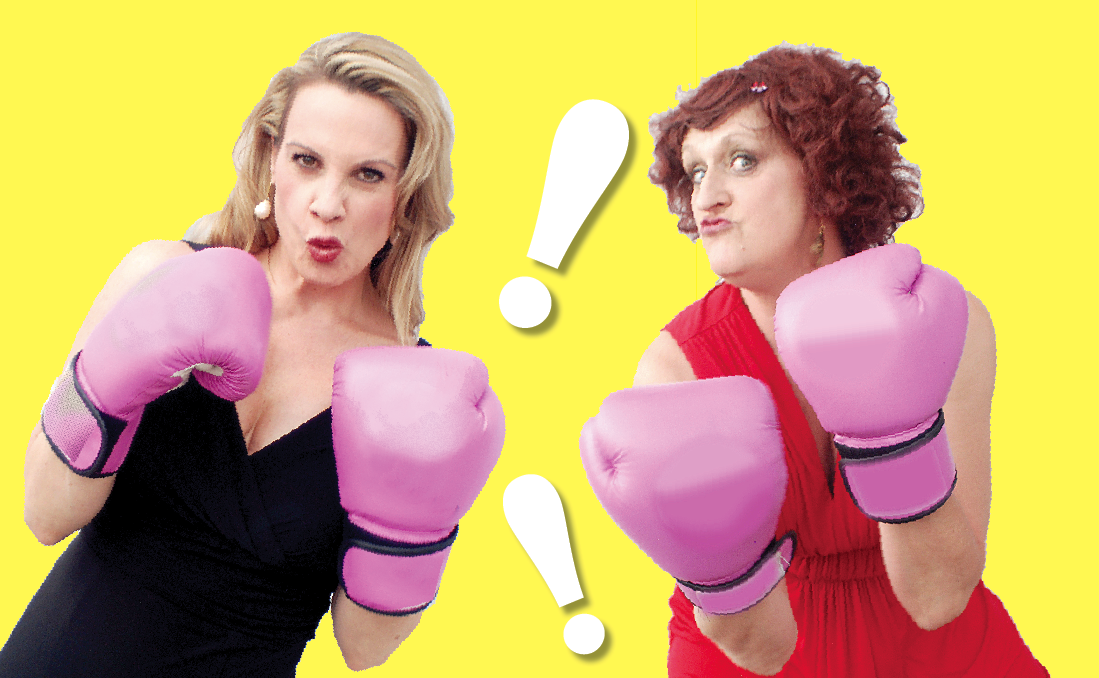 Opera isn’t for everyone. Bugs Bunny didn’t cotton to it. Even Mark Twain, who did rhapsodize on the power of the aria, described the no man’s land between those dramatic interludes as “incoherent noise which always so reminds me of the time the orphan asylum burned down.”

Babette Matdiva (Birgitta De Pree) begs to differ. And with the help of noted musicians Judeth Shay Comstock and Dan Brink, as well as clown extraordinaire Jim Jackson, “Babette’s Knock Out Opera” intends to set the record straight. This clever and irreverently funny deconstruction of the form – and all its silliness, grandeur and poetry – runs through Nov. 27 at the Millibo Art Theatre.

Opening night starts with the Kodak moment everyone expects of an opera recital. The lit candelabra. The decked-out soprano leaning decoratively against a grand piano. The tuxedoed pianist at the ready.

But Babette puts a stop to that stuffiness immediately.

“No, no, no,” she says, shooing the singer into the back for another outfit and approach. “This is scary for people. It’s so formal.

After the somewhat disjointed opening bit, what follows is a low-budget, highly amusing primer that includes tutorials on how ordinary life can be transformed into high drama by opera and snippets of 12 opera deaths in about 12 minutes, including scenes from “La Traviata,” “La Boheme,” “Romeo and Juliet” and “Carmen.” And each ending is punctuated by Babette’s heavy (Bulgarian?) accent uttering the fateful words, “She die!” (Or “he die” or “they die.”) Even the flubs work their way into the bits.

The second half of the roughly 90-minute production focuses on longer offerings of arias well-known (“Un bel di” from “Madama Butterfly” by Puccini, for instance) and lesser-known (“Song to the Moon” from Dvorák’s “Rusalka”). To say that Shay Comstock can sing is a titanic understatement. This accomplished soprano lights up this repertoire with confidence, musicianship and a voice full of pain, loneliness, love and yearning. She also handles the comic elements with ease.

A fixture of MAT productions, Babette is part temptress and taskmaster, often creating the chaos that she’s earnestly trying to control. (Come early and you’ll likely meet her in the lobby.) It’s easy to overlook the fact that De Pree is playing a character, but don’t be fooled. Each time she resurrects Babette, she masterfully energizes the character with larger-than-life humanity, pathos and humor.

De Pree is a perfect (and well-practiced) foil for Jackson, who conjures a childlike abandon, sweetness and petulance as needed. Some of my favorite moments – such as his scheme for staging “Romeo and Juliet” – were grounded in his delightful work.

In that onslaught, the audience is willingly sucked into the mayhem. The MAT, in fact, consistently creates an audience experience that is not only inclusive but deeply freeing – and so often surprising. While “Babette’s Knock Out Opera” may not make you a permanent convert to opera, you will likely become a fan of The MAT. – Written by Tracy Mobley-Martinez