“MAT is one local theater that has no fear of taking chances on new work and edgy theater. ” – Bill Wheeler

The Book of Moron 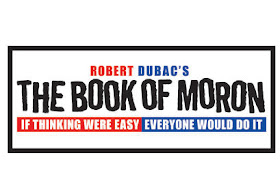 Company:  Millibo Art Theatre
Venue:  Millibo Theater, 1626 S. Tejon Street, Colorado Springs, Colorado.
Running time:  1 hour, 30 minutes (no intermission).
Date of Performance:  Saturday, September 10, 2016.
Mr. Dubac’s show is called The Book of Moron, and that’s also the first joke you will hear. It’s actually in the prerecorded curtain speech.  “If you came to see the Book of Mormon, the title of this show applies to you.”  It’s a funny line; we all laugh because we all knew we weren’t seeing the Broadway hit.  Right?  We all knew that? 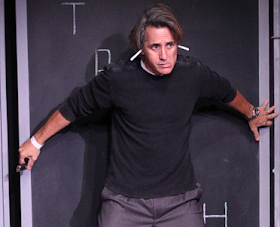 Having cleared up the confusion, Dubac embarks on his 90 minute one man show full of wit, wisdom, zingers, and political points.  The show is a comedic search for the “truth,” whatever that may be.  His only set pieces are a blank chalk board where he can track his progress towards the “truth,” and a wooden box.
Dubac begins as if awakening from a coma; he has lost his memory.  He’s not sure what the “truth” is or how to find it.  The search for the “truth” requires Dubac to consult the various voices in his head:
Voice of Reason:  holds the key to the door of truth.
Common Sense:  Engages in critical thought but banished from politics.
Inner Moron:  Ignorance is bliss.
Inner Child:  Hungry for the truth at all 4 levels, the first of which is “bullshit.”
Inner Asshole:  He says what we only say say when we’re drunk.
Scruples:  Ethics, morals and principles; helpful for questioning the taboos of sex, race, religion, politics and the media.
These characters are all distinct and separate versions of Dubac, each with seemingly endless comedic possibilities.  Dubac’s delivery is relentless; it seems like every phrase is a zinger.  He says something to offend nearly everyone in the room, but he is especially hard on the political right wing.  It’s all funny, and he take shots at both sides.
As I said above, the set includes the wooden box.  It’s probably about 18-24” tall, and big enough for Dubac to stand in.  He uses it to demonstrate a current cliché: sometimes he thinks about things inside the box.  Other times, he thinks outside of the box.  It’s a simple but brilliant device to visualize our thought processes.
The journey to the truth is hilarious, but when Dubac finally arrives at his destination, he’s both poignant and sobering.  The jokes are over.  The truth is made clear.  I won’t spoil the ending, but I can say that it gives everyone in the room a chance to reflect on Dubac’s point. 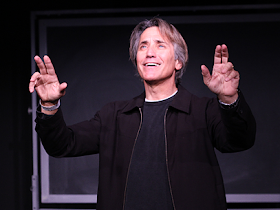 Comedy isn’t just a fun diversion.  Sometimes it’s a means to help us better understand ourselves.  The Book of Moron is one of those rare shows that can make us laugh as we learn important lessons.
NOTES:
This show contains adult language and humor.
I recently overheard a discussion between two young fathers discussing F bombs and their kids.  One was telling the other that he let his kid know he would use the F word whenever and wherever he pleased.  That’s just how he talks.  The other father didn’t disagree or argue.  If this is the current parenting approach, the time is coming when we won’t need to separate the kids from adults at shows.  I’m no prude, but the line between vulgarity and civility seems like something children should understand.
MAT is one local theater that has no fear of taking chances on new work and edgy theater.  Hosting Robert Dubac for two nights of comedy is a rare opportunity for local fans to see a nationally recognized performer in such an intimate venue.  It’s also expensive; I doubt ticket sales can cover the costs.  In October, MAT will host Rembrandt Room on tour, a production of Denver’s award winning and highly original Buntport Theater Company.  Fans of original and edgy new shows don’t have to go to Denver.  MAT is bringing Buntport here.
There’s a LOT going on at the MAT.  I just thought you’d want to know that.
This show is closed.
Photo Credit:  Millibo Art Theatre and robertdubac.com.
TICKETS HERE:  This show is closed.
CREATIVE TEAM:
Written and Performed by:  Robert Dubac
Executive Producer:  William I. Franzblau
Tweet
Pin
Share
0 Shares