Seven all-new and original rehearsed play readings. The Thespiana staged-reading play festival showcases the talents of local playwrights, directors and actors.  A reluctant hitman, a pianist who might be too good for his own good, and a giant from futuristic freak show are among the amazing characters you’ll meet in this fourth outing of Thespiana.

One Last Job – written and directed by Jeff Schmoyer
Is it ever, really?

Professor Pincklewhomper’s School for Realistic Expectations,
adapted excerpt – written by Mark and Lauren Arnest, directed by Mark Arnest
At the School for Realistic Expectations, founded by Professor Pincklewhomper 30 years ago, the teachers ensure happy lives for their students by teaching them not to bother striving, until a new student shows up who is interested in theater, which creates havoc for everyone as the administration encounters strange new feelings and admissions of insanity—or is it?

Speak of the Devil – written by Chuck Cabell, directed by Robert Tiffany
A young lawyer yearns to be a great pianist.

Thren – written and directed by Warren Epstein
Based on an excerpt from Warren Epstein’s upcoming sci-fi novel “Carn,” Thren tells the story of an unlikely friendship between a boy and a giant in a carnival in the distant future.

Veterans’ Affair – written and directed by Sue Bachman
It’s Memorial Day at the VFW, when a wife and a Gulf War vet prod four ordinary Vietnam-era veterans into sharing their wartime experiences for the first time.

What Matters – written and directed by Debby Brewer
Johnny visits his mother.

The Performance Line Up: 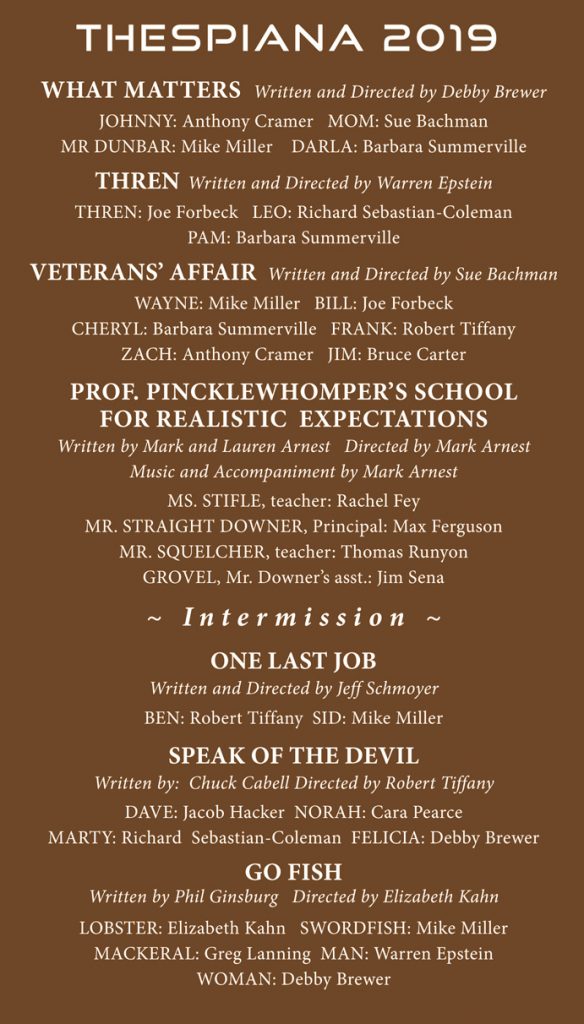