Thanks everyone who came out to see Trump Lear –
All three shows  sold out with a fourth show added just a few days prior to the run.

Direct from New York – a hilarious one man Shakespeare with timely political satire. David Carl (Gary Busey does Hamlet) returns to the MAT in a hilarious one man show playing an actor names Carl David who evokes the wrath of the President as he creates a solo version of King Lear – Shakespeare’s tragic play of a ruler whose vanity tears his country apart. 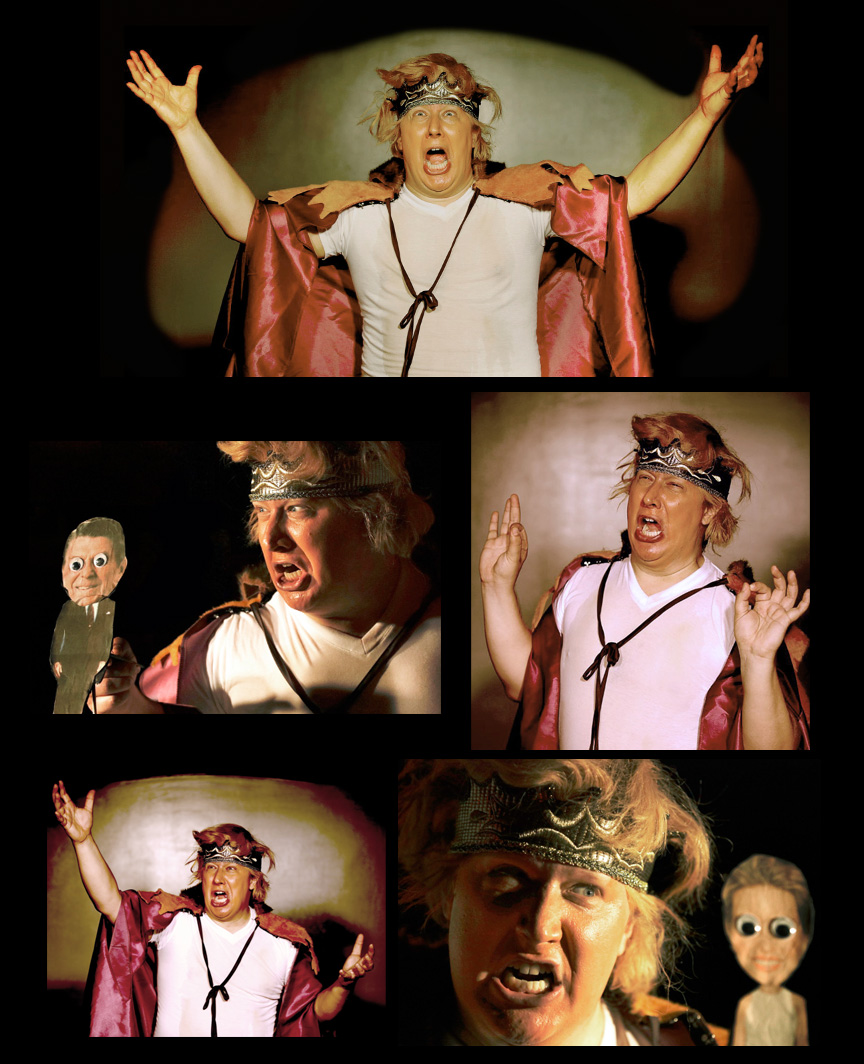 “Actor and impersonator, Carl David, is being held without bail for performing his Trump-inspired version of Shakespeare’s King Lear. Carl David is forced to perform his King Lear to an unseen online audience of one, as the President restlessly watches remotely from a live and public feed. The stakes are high: if Trump likes Carl and his show, Carl lives. If not, Carl dies. But how can Carl get through a show where he has created a Lear based on Trump himself without offending the audience?”

David Carl (Co-Creator/Writer/Performer/Puppet Designer/Video Designer) is an actor, comedian, and impressionist in NYC, raised in Dallas, TX. David plays Gary Busey in Point Break LIVE! and David Carl’s Celebrity One-Man Hamlet, which he wrote with some help from Shakespeare. The latter was a breakout hit of the 2014 New York International Fringe Festival, receiving an extended run at Baruch College and an award for “Overall Excellence in Solo Performance”. Recently David was nominated for a New York Innovative Theater Award for Solo Performance. Other original works include The Power of Me (co-written with Samuel Brett Williams), and David and Katie Get Re-Married (co-written with Katie Hartman). He also has a show called 100 Impressions in 30 Minutes with David Carl, and has spent 2015/2016 playing all of the presidential candidates in the debates before they happened in Road to the White House. In October he played Donald Trump in Trump Takes On…Boston at Laugh Boston for 22 shows leading up to the election. He has a BFA from the University of Evansville in Performance, an MFA from Rutgers (Mason Gross) in Acting and completed improv training at UCB, the Magnet and The PIT.

Michole Biancosino (Co-Creator/Director/Projections Designer) is the Co-Founding Artistic Director of the award-winning Project Y Theatre Company, where she has developed and directed new work in Washington, D.C. and New York City over the past 18 years. She is also the Founder and producer of NY’s Women in Theatre Festival which just closed at ART/New York Theatres. With Project Y, she has led various professional productions, as producer, director, and writer. Directing work includes: Connected (NYIT Award winner), LoveSick or THINGS THAT DON’T HAPPEN (NYIT Award winner), The Revival (NYIT Award winner), A User’s Guide to Hell featuring Bernard Madoff, Derby Day (Paper Mag #2 Show of the Year), Goodness, and Gidion’s Knot in NYC, and many others in NYC, Edinburgh, New Orleans, and Washington, DC. Producing: The Religion Thing (Time Out NY Critics Pick), FUBAR, 3 years of New York New Playwright Festivals and NY’s Women in Theatre Festival (#WITFestival). Other collaborations with David Carl include the original shows, The Power of Me, a send up of modern spiritual gurus and the culture of self-help books, blogs, and celebrity, David and Katie Get Remarried, and “100 Impressions in 30 minutes with David Carl” all at The PIT, NYC. She currently is currently directing SOLOCOM Founder, Peter Michael Marino‘s one-man show, Show Up! at Edinburgh Fringe.Michole is a recipient of the prestigious SDC Gielgud Fellowship for classical directing and multiple SPARC artist residencies through the Brooklyn Arts Council. For more info about her work, visit www.micholebiancosino.com.