The American Theatre Wing announces the The Millibo Art Theatre
is one of  the 12 recipients of its 2017 National Theatre Company Grants.

The Millibo Art Theatre (Colorado Springs, CO) is dedicated to the production and creation of original, professional theater that will challenge, inspire and entertain audiences of all ages throughout the Pikes Peak region and beyond. Recognized as an arts leader in the community, with numerous award-winning shows and exciting community collaborations, the MAT fills a unique niche in the Pikes Peak region as it explores new avenues for empowering and engaging artists, audiences and the community in the creation and appreciation of new theatre.  Each $10,000 Grant will be distributed for general operating support to companies which have articulated a distinctive mission, cultivated an audience, and nurtured a community of artists in ways that strengthen and demonstrate the quality, diversity, and dynamism of American theatre.” 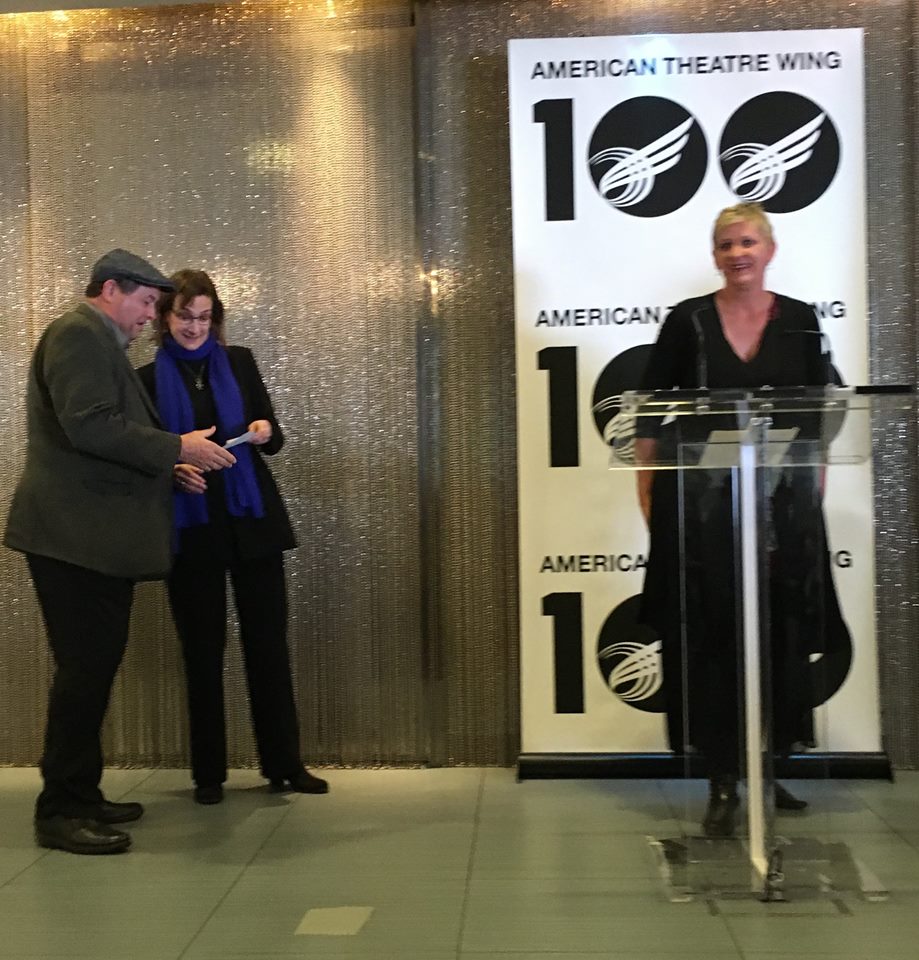 Birgitta De Pree made a very gracious acceptance speech as Jim took the money and ran at the National Theatre Grants Awards at the Viacom in New York City. The grants are given by the American Theatre Wing and twelve innovative, small theatre companies selected from throughout the country each received a check for $10,000. THANK YOU!

“The twelve theater companies that we have bestowed with year’s grants have demonstrated their invaluable impact on their local communities,” said Heather Hitchens, President of the American Theatre Wing. “I am proud to be continuing the Wing’s development and outreach to young and established theater companies as they continue to enrich their respective communities by producing outstanding work with these grants”

“Theater is an integral part of our shared cultural identity throughout the United States, expanding the dialogue between our neighbors and connecting us to one another,” said Marva Smalls, Chair of the National Theatre Company Grants committee. “Our selection for this year’s grants demonstrates how remarkable companies all across America, from Buffalo to Albuquerque and every place in between, are vital to continuing this venerated tradition.”

About the American Theatre Wing
One hundred years ago, on the eve of America’s entry into World War I, seven suffragettes—all women of the theatre—came together to form The Stage Women’s War Relief. A century later, the spirit and vision behind the founding of American Theatre Wing remains a touchstone for all we do. The Wing continues to champion bravery, with a focus on developing the next generation of brave artists. The Wing advances the future of American Theatre by celebrating excellence and nurturing the next generation: on stage, behind the scenes, and in the audience. We envision an American Theatre that is as vital, multi-faceted, and diverse as the American people.
The Wing’s programs span the nation to invest in the growth and evolution of American Theatre. We provide theatre education opportunities for underserved students through the Andrew Lloyd Webber Initiative, develop the next generation of theatre professionals through the SpringboardNYC and Theatre Intern Network programs, incubate innovative theatre across the country through the National Theatre Company Grants, foster the song of American Theatre through the Jonathan Larson® Grants, honor the best in New York theatrical design with the Henry Hewes Design Award, and illuminate the creative process through the Emmy-nominated “Working in the Theatre” documentary series. In addition to founding the Tony Awards® which are co-presented with The Broadway League, the American Theatre Wing co-presents the Obie Awards®, Off Broadway’s Highest Honor, with The Village Voice.
Visitors to AmericanTheatreWing.org can gain inspiration and insight into the artistic process through the Wing’s extensive media collection, and learn more about its programming for students, aspiring and working professionals, and audiences. Follow the Wing on Twitter and Instagram @TheWing, and on Facebook.com/TheAmericanTheatreWing.
Tweet
Pin
Share
0 Shares